This last April, British environmentalist and adventurer David de Rothschild set sail in a catamaran he had constructed entirely from recycled PET bottles. As a statement to the growing global problem of ocean pollution and the need for higher recycling standards, de Rothschild planned to sail to what Planet Green Bottle calls “Plastic Soup”, a floating mass of plastic waste nearly the size of Texas suspended in the middle of the Pacific Ocean. This British adventure-seeker may have found the most creative way yet to call attention to this pending environmental risk, but plastic engineers and manufacturers have been working towards a solution in more conventional ways for many years.

Polyethylene terephthalate, or “PET”, is a petroleum-based resin and may be broken down and recycled almost limitlessly. The addition of dies, fiberglass and other composite materials sometimes reduce PET’s recyclability, but the majority of PET materials, such as the beverage bottles out of which Mr. de Rothschild constructed his boat, are recycled at a cost relative or lower than that of purchasing virgin materials. Still, many water bottles, soda bottles and other beverage containers never make it to the recycling bin, ending up in landfills, or worse: the Pacific’s Plastic Soup. 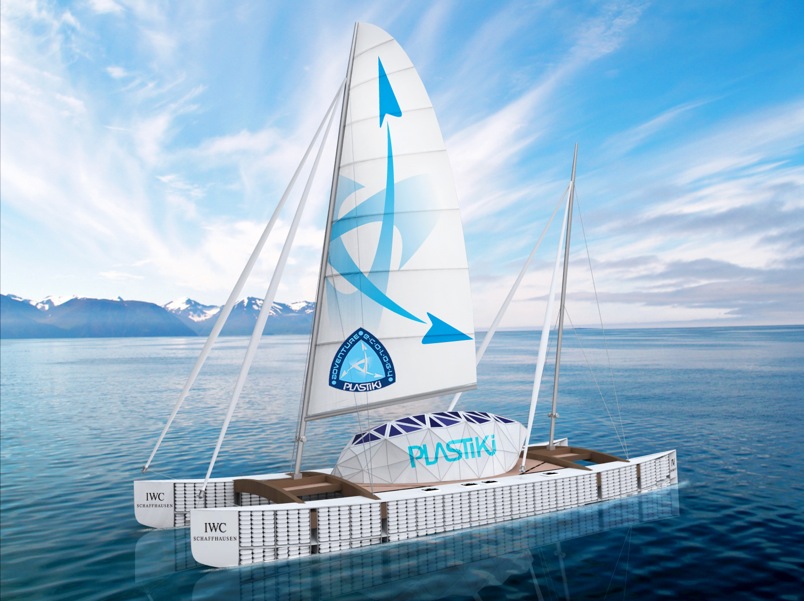 Various versions of biodegradable blow-molding PET resins have emerged. The first, championed by Planet Green Bottle, has been trademarked Reverte™, and is essentially an additive which can be added to regular, petroleum-based polyethylenes to cause PET products to degrade into CO2 and water under UV light exposure. Reverte™ solves two problems: inert, non-degrading plastic waste (Plastic Soup), and the problem of contamination when recycling petrol-based polymers with bio-based polymers. However, it perpetuates another problem: the continuing production of virgin petroleum materials.

Three scientists from the American Chemical Society have set out to solve the problem of using renewable materials in a very creative way. Keratin from ground chicken feathers has been processed into a biodegradable polymer film with high tensility and 100% natural degredation. This film has been processed into a wide number of polymer items and is completely suitable for blow-molding. As strange as this polymer sounds, if chicken feather polymers caught on, several billion tons of chicken feathers would be put to good use every year – better use than being ground into “feather meal” and fed back to livestock, which is an excellent conductor of avian flu.

The most common, and perhaps the most practical development in bio blow-molding is a simple, starch-based polymer. Coined and developed independently by many plastic engineers and manufacturers, there are several variants: vegetable starch from agricultural products such as corn, wheat, tapioca and potatoes are processed into biodegradable polymers which, incidentally, require lower levels of heat for forming, saving manufacturers money on energy.

While all three of these developments are far from mainstream, they all pose interesting questions in the plastic manufacturing community. How far are we willing to go to become better stewards of our environment? What creative solutions can we develop to make environmental responsibility profitable? How can we facilitate a shift in consumer thinking that will help this transition?