The Starts and Stops of Air Cylinders

The Starts and Stops of Air Cylinders

In nearly every old-timey Hollywood hit there is bound to be a dramatic scene depicting the picturesque steam engine train racing across the pristine landscape. Popular locomotive history is likewise riddled with praise for the steam engine, yet there are few mentions of its fireless companion: the air cylinder powered train. Maybe the name just is not quite as catchy. Names aside, pneumatic cylinders were popular in the locomotive world of the past. Far from a relic, however, air cylinders are in wide use today. Found in virtually every modern form of transportation, they generate linear force and motion from compressed air. These economic and environmentally friendly devices are responsible for the stop and start of planes, trains, automobiles and more. 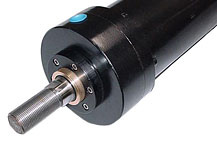 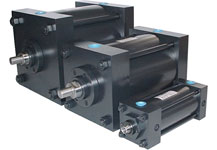 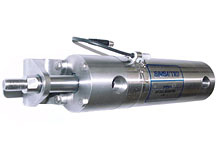 While it is not altogether uncommon for a single device to traverse several transport industries, it is impressive for a mechanism that runs off of compressed air. The cylinder, like the power source, is quite simple in design and function. Air is forced into an enclosed chamber, the main body of the cylinder. This cylinder is divided into two compartments by a piston, a disc-shaped metal piece fitted to the cross-section of the barrel. A piston rod is attached to this disc at one end and extends beyond the body of the cylinder through a seal or port. The rush of pressurized air engages the piston moving it either up or down. The attached piston is retracted or extended depending on the directionality of the air flow. While single-acting cylinders move only in one direction, double-acting cylinders further increase the applicability of air cylinders as they are multidirectional. No matter up or down or both, the repeated pumping action creates the force needed to push, pull and lift machine linkages and any attached loads. 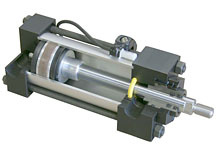 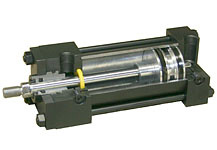 In the transportation industry, the vehicle and everything in it is the load. Trains, planes, trucks, cars and other vehicles vary significantly in weight. A loaded semi-tractor trailer, for example, can weigh up to 80,000 pounds while a Boeing 737-800 plane can weigh as much as 187,700 pounds. For both, compressed air cylinders are an important component of the braking mechanism. In these uses, air cylinders create the pressure applied to tires and wheels to slow and eventually stop them. Stopping is not always the most taxing task; air cylinders must at times generate enough linear force to start a heavy vehicle in motion. In a standard car engine, the pistons in the air cylinders are used to turn the crankshaft and start the tires spinning.

While these are some of the most important industrial uses for air cylinders, not all cylinders are used for such burdensome tasks. The constant companion of the transportation industry is popular in other contexts as well. Comparatively small air cylinders are used in medical, textile, food processing and many other industries. They even provide oxygen for both SCUBA divers and airplane cabins. It is most definitely time to give credit where credit is due. Although steam engines may have been all the rage at the time of their invention, it is clear that air cylinders are an essential feature of not only our current transportation system, but modern life in general.