The Uses and Advantages of Robotic Palletizers

The Uses and Advantages of Robotic Palletizers

For those in love with Pinterest and other crafting sites, we are no strangers to pallets. Old wooden pallets especially have become a major source of crafting projects in recent months, with new ideas popping up everyday. But, while we may know the one billion craft possibilities for them, the majority of us ‘pinners’ do not really know much about how or where they are originally used. The reason there are so many pallets easily available to us is because of their major uses in a wide variety of industries. They are the most popular in industries that would deal with mass shipping and distribution. Pallets can turn handling many small units into one large unit, assisting with organization and efficiency. However, handling all of these massive and heavy pallets can be a difficult task. To help, palletizers are typically employed. 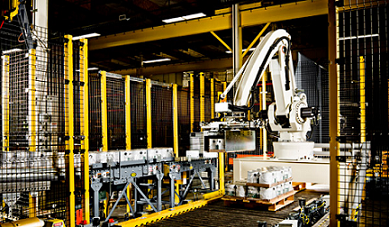 One reason those who work with pallets will really appreciate robotic palletizers is because of how they are able to greatly reduce human injury and make a less stressful and more pleasant work environment. All of the constant lifting, rotating, wrenching and other strenuous movements that are required when dealing with pallets can be very hard on workers. Constant activity such as this could compromise employee heath. What employers would see is that eventually it will lead to lowered efficiency, lowered productivity and in many cases heightened healthcare costs for employees. By having palletizers do the work instead, the environment as a whole greatly improves.

Robotic palletizers are a very popular option, and these can be broken down into many types as well. Variations such as bag palletizers, which will be employed to handle large bagged products, or depalletizers which are important for unloading products from the pallets are a few examples of the many options available. Additional options can also be included in palletizers to make for a safer workplace such as features like QuickSTOP and Smartscan. The former option is able to detect problems within the palletizer to prevent any issues or damage. The later option meanwhile is able to detect human presence to reduce the chance of injury to humans. While it might seem like a slight investment in the beginning, in the long run, the benefits and help achieved through using palletizers makes the investment well worth it. Although a robotic palletizer may not be worth it for crafters who plan on painting pallets to be stacked and used for a side table, they tend to be the perfect industrial option.