With the Vancouver 2010 Winter Olympics well underway, newsrooms around the globe follow a rising medals count. The elite athletes participating in the games and their eager nations watching from afar hope for the fulfillment of the ultimate Olympic dream, standing atop the podium as a gold, silver or bronze medal is draped around their neck. For many of the more than 5,500 Olympians representing more than 80 nations, receiving a medal will remain a dream, an ambition for future feats of athleticism perhaps. For a select 615 individuals, however, that dream will become a realization. 615 is the exact number of medallions created at The Royal Canadian Mint for the XXI Olympic Winter Games. Each of these was produced through unique metal stamping processes creating one of a kind medals for each athlete’s one of a kind moment.

The International Olympic Committee imposes strict regulations on the creation of Olympic medals. The size, weight, composition and inscription of each gold, silver or bronze piece must meet the highest of standards. The 30-step process resulting in medals of such caliber begins with sheet metal stamping, the same process used to mint coins. Using pre-formed sheets, which may be inspected in advance, ensures that each piece adheres to predetermined parameters. Sheets of pure silver are used to create both the silver and gold medals, the latter of which is later plated with at least 6grams of gold. The Bronze medals are stamped from sheets of alloyed copper. The 6mm thick metal of either composition is fed through a machine which stamps out blanks, or medallions lacking inscription. The blanks for each medal must be 100mm in diameter. Precision metal stamping is then used to impress the lettering and imagery onto each medal.

The specific design and inscription of an Olympic medal varies each year. Several committees must agree upon a design and production scheme for the medals before shortrun stamping begins. Shortrun stamping allows for the creation of a limited number of medals in a narrow period of time. For most Olympics, this is the final step in creating the finished and inscribed medals. The Vancouver design committee, however, has added a hand stamping process. Each piece is struck by hand a total of nine times to create an undulating wave in the medallion. This is meant to symbolize the ocean waves, snow drifts and mountains of the host country. In striking the metals by hand, designers and artists create personalized medals. 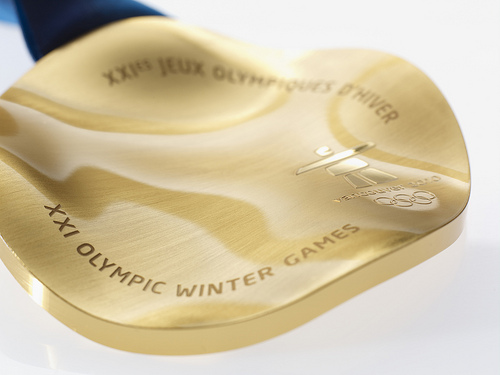 The final product of the metal stamping process is a unique memento and sign of achievement for the receiving athlete. While the recipient of an Olympic medal might know little of the manufacturing technique behind its creation, each is no doubt keenly aware of the importance of that process. The Olympic medal is more than just a slab of stamped metal. It embodies the aspirations of all competitive athletes. It is a specially designed, carefully crafted and beautifully orchestrated work of art.

Lasers Will Ensure a Bug-Free Summer